In China, November 11, or 11/11 is known as Singles Day (see, there’s 1 and 1 and 1 and 1–geddit?, a time when people are encouraged to buy stuff for themselves.   It’s a cultural fact of life, but one that foreign brands are tapping into to leverage the one big shopping day in the world’s biggest market.

What other occasions in other countries could foreign markets start cashing in on?  What are the lessons for anyone trying to break into a foreign market? 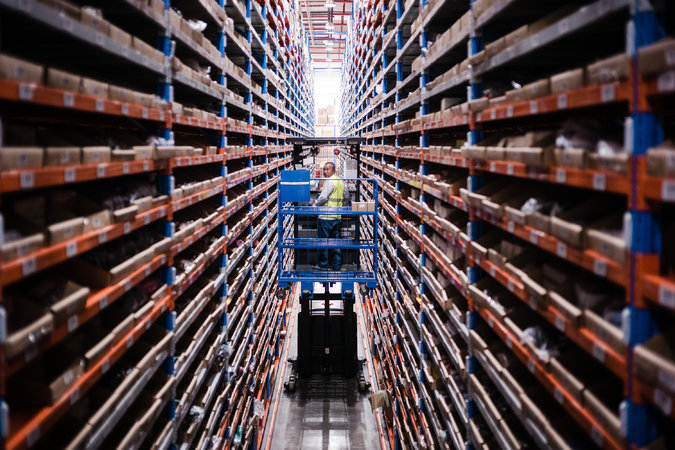 Preparing to fill Singles Day orders at Mei.com’s 100,000-square-foot warehouse in Shanghai. About 95 percent of the site’s stock is from international brands.
CreditEric LeLeu for The New York Times

HONG KONG — Over the last year, A2, an Australian milk company, made an unexpected discovery: A sharp increase in domestic sales came from Chinese bulk buyers, not local mothers.

To bridge the 4,000-mile gap between its continent and the doorsteps of its newest customers, A2 began selling its products in two of China’s biggest online marketplaces — Tmall, part of Alibaba, and its rival JD.com. Six months later, A2 is part of the frenzy of discounting that is Singles Day, China’s annual shopping festival.

The commercially driven event began as a celebration of single people, held on a date that said it all, 11/11. But it has long since moved beyond the province of lonely shoppers and Chinese vendors. This year, a long list of foreign companies waited for the clock to hit midnight.

At stake were potentially billions of dollars in sales and access to the wallets of a growing Chinese middle class. This year, Alibaba sold $14.3 billion worth of products, surpassing last year’s total of $9.3 billion. JD.com and other Chinese e-commerce companies also got into the Singles Day action with their own deals.

“Double 11 is a really big part of my calendar,” said Scott Wotherspoon, the chief executive for A2 in Britain and China. Online outlets “have allowed us to get into China in a much more direct way.”

Companies like A2 are being welcomed into China as Beijing tries to stimulate growth by increasing consumption. The boom in online commerce is a major part of that plan — so much so that the office of Premier Li Keqiang offered encouragement to Alibaba, a private company.

Although online purchases account for only about 10 percent of China’s overall retail sales, government officials “are pretty optimistic, because they see this part of the economy growing very fast,” said Xiaoping Ma, an HSBC economist. “That will have significant future implications.”

And an increasingly affluent population and rising numbers of Chinese tourists have pushed up demand for foreign products. Chinese consumers attach particular importance to the sources of certain goods. They are more likely to buy beauty products from France and South Korea, shoes and bags from Italy and health care products from Australia, according to Nielsen research. After several food safety scandals in China, foreign produce is often seen as safer.

Days before Singles Day, Cheng Xin, the mother of a 22-month-old boy, had already filled her shopping cart at Alibaba’s Taobao with 73 items, like Uniqlo baby underwear and Mellin baby food from Italy, worth about 30,000 renminbi, or about $4,700.

Her husband was leery of the price. But she hoped that with the help of the delete button and deeper discounts on Singles Day, she would be able to get her cart down to about 10,000 renminbi. 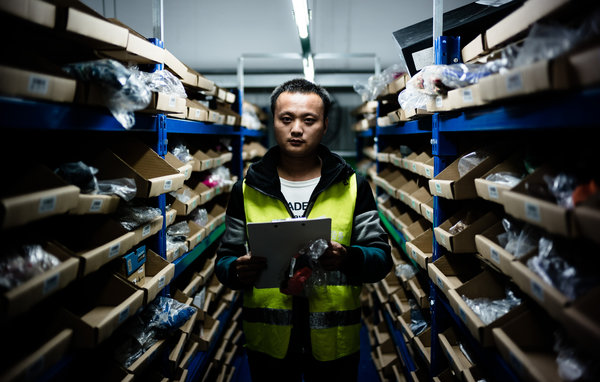 “For my baby, I feel more confident with foreign brands, especially food,” Ms. Cheng said. “And with clothes, I also feel the design of the foreign brands are better. I think domestic brands have made progress, but still they are not that cool.”

Since its inception in 2009, Singles Day has become a whirlwind of discounting, as bargains abound on overseas products. Alibaba said that it offered 5,000 overseas brands from 25 countries.

Alibaba’s Tmall site for Procter & Gamble sold out of Always sanitary napkins, which were being sold at 69 renminbi, or about $11, for two packs, down from 170. It was also offering one Aussie shampoo and conditioner for 99 renminbi with free shipping, rather than the usual 236. A box of Pampers diapers was cut to 199 renminbi, from 478.

Nike was offering shoes at almost half price, while prices for pillowcases from Macy’s were down to 399 yuan from 699 yuan. There were nuts from Costco and Craisins from Ocean Spray. Consumers could get loyalty points for buying an iPhone 6s.

“Four years ago, we had to chase brands to convince them to be part of the game,” said Thibault Villet, the chief executive at Mei.com, a luxury retail website where international brands account for about 95 percent of the stock. “This year, we were in a position to choose the brands we wanted to partner with, because there’s much more interest to partner and join the competition.”

In addition to established brands, newer players, like A2, are looking for a foothold in China. 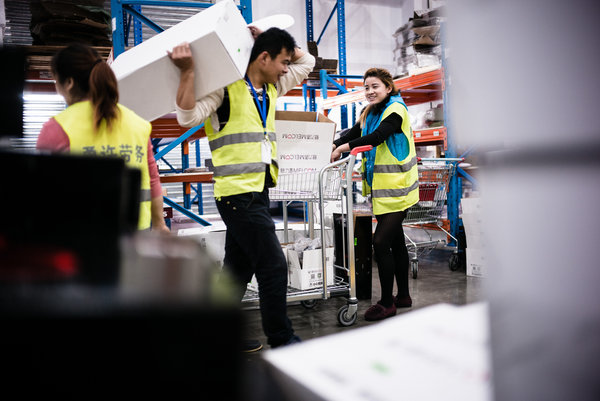 Workers preparing the parcels for the sales of Nov. 11 “Singles’ day”.
CreditEric LeLeu for The New York Times

“The way I see this, we’ve only got our business going since we went online,” Mr. Wotherspoon said, referring to sales in China. Although there is huge demand for milk formula in China, he added, having an online presence helped the company reach consumers more easily.

The company offered deep discounts and deals that encouraged multiple purchases. And there were opportunities to preorder, reassuring parents that they could get a constant and reliable supply in the future.

“The rise of e-commerce has been a staggering door-opener for companies with relatively small resources to talk to consumers,” Mr. Wotherspoon added.

JD.com, Alibaba’s smaller competitor, has taken advantage of the interest in foreign goods by opening storefronts showcasing products from specific countries, like Germany, Japan and the United States.

“Singles Day is partly about the volume of sales, but it’s about bringing new users to our platform,” he said. “If we’re able to introduce new users, we’re able to convert them into longtime customers.” 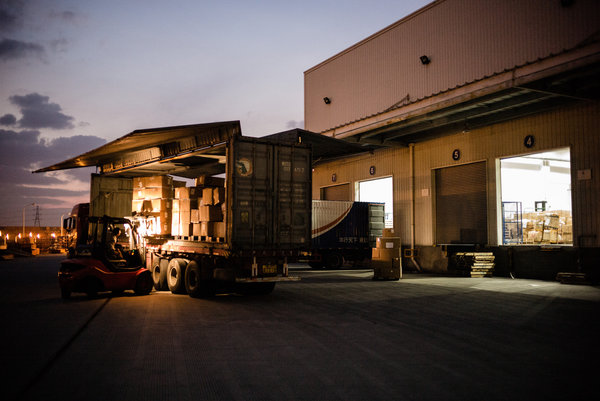 Outside, a truck is loaded with boxes for delivery.
CreditEric LeLeu for The New York Times

Alibaba made globalization the theme of its four-hour gala before Singles Day kicked off, and it has been promoting itself to foreign retailers as a point of access into China.

In a news release, the Alibaba founder, Jack Ma, promoted the opportunities that this access gave. “There are currently 300 million middle class in China, and that number will rise to 500 million in 10 to 15 years,” he said. “This will be an opportunity for every nation. China’s consumption power will rise quickly, and that will not only drive China’s economy, but also the world’s economy.”

Alibaba even had a promotional video featuring a very American figure — Kevin Spacey, playing President Frank J. Underwood in the TV show “House of Cards,” — suggesting that shoppers could perhaps buy a signet ring, or even a desk like his, on Singles Day.

“We’ve been looking at data on Chinese spending habits, demand, international categories that would resonate — everything from maternity, to apparel, to domestics to home appliances, fresh foods,” said Jennifer Kuperman, Alibaba’s vice president of strategy and planning. “These categories, we believe, and have proven, to sell well in China.”

They are all trying to stand out in an increasingly crowded field.

Vipshop, a site for fashion and beauty products, is betting that offering lesser-known overseas brands not yet available in China will attract customers looking for items they saw while traveling, like health care items from the Australian brands Blackmores and Swisse.

“In the past, they have to travel or ask friends to buy for them,” said Tony Feng, the company’s vice president for Chinese shoppers.

On Singles Day, Vipshop is highlighting its selected choices, rather than expanding its offering. Mei.com has chosen to focus on shoes and handbags.

This was welcome news to Jeakey Chen, who had her eyes on a pair of boots from the British brand Clarks, to which she took a liking when she was a student in Sheffield, England. Apart from a washing machine for her parents, she did not plan to buy anything else.

“It’s kind of stressful to search and compare prices,” she said.

Diwali is a two month long Hindu festival in India celebrating Lakshmi, the goddess of wealth. During Diwali, participating consumers around the world purchase high dollar products, such as gold and electronics. Although the festival itself takes place in India, it is celebrated all around. This presents an opportunity for foreign markets; especially in geographical areas outside of India with a large Hindu population. To successfully enter foreign markets, businesses have to do the proper marketing research. To enter a foreign market during Diwali, a few things businesses can do is understand the local economy in their target markets, know what products consumers are looking for, and evaluate their competition. There is much involved in entering new markets and it is essential that businesses create a strategic marketing plan around their target market.

Which of the following items is the one type of household expenditure that is... 3ip managing high performance
Scroll to top